One Of My Favorite PTI Card Creations of 2010

I did not have a hope of narrowing down my favorite Papertrey Ink creation for 2010, so I had to close my eyes and haphazardly point to pick just one.  The problem of picking one favorite is because most if not all cards I've made seem to have taken me a little ways further down my papercrafting journey for one reason or another.  Be it that I tried a new technique (some with greater success than others), received a new stamp set that thrilled me or was greatly moved and inspired by a creation from another fabulous crafter or three and that is just for starters!  I am certain that each card I made had some "little thing" behind it that endeared me to it specically or had me grow just a bit more than the card before.  You just have to look at (or guffaw at) the first or second card I ever made, some years ago, to see how I have evolved into the papercrafter I am today.  Having said that, I don't know if I have become a better/more complex crafter, but I sure have learned a ton and had a bucketful of chuckles along the way.

So my chosen Papertrey Ink card for 2010 is this Christmas card I made showcasing Papertrey Ink's Stocking Prints: 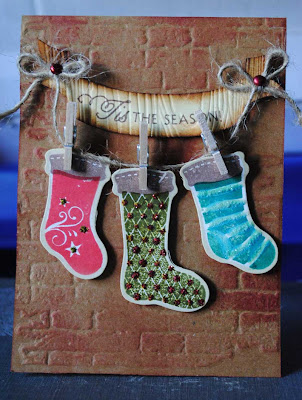 Thanks so much for allowing me to share with you a little bit of the joy that papercrafting and Papertrey Ink have bought to me in 2010.  Happy 4th Anniversary Papertrey Ink! xx


Edited to add:  The fun brick wall was made from an embossing folder from Tim Holtz.  It's called Bricked. (I wish I was that clever!).  *wink*
Posted by Jen Adcock at 12:35 PM

I never saw this card Jen. How did you do that brick background? It looks great. If it isn't some kind of patterned paper I am really going to feel inferior. It is a great card and once again, I laughed when I read your narrative. So glad I am a follower of your blog.

Wait a second........I keep staring at the brick wall. How in the heck did you do that?! I've only had one glass of wine tonight, but I am staring at that like I drank the whole bottle! That is amazing!

Nice job!! And thanks for visiting my blog. I really like the background with the juxtaposition of colours/prints of stockings.
- cards by cara

I don't remember seeing this card but it is a great one! Love that brick wall background.

Great card you chose to enter into PTI. Love the brick look. :)
Hugs~

Adorable card Jen! Love the embossed brick wall and all the lil' stockings hung by the chimney with care :) I'm glad you chose to show us this one again! Good Luck :)

Jen Adcock
I am a blessed wife and mother of 7 fun, creative and full of beans kids, who is thoroughly moved and inspired by papercrafting. I was born and bred in New York, but am currently living and growing in Australia. 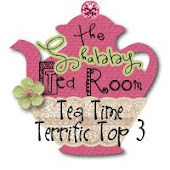 Some Of My Other Favorite Places To Visit: